With less than two weeks before Canadians vote in a federal election, the race is too close to call. But what is certain is that for the first time in recent memory, no matter which party wins, the government spending taps will be wide open.

The ruling Liberals and the rival Conservatives are both promising tens of billions of dollars in investments if they triumph in the Sept. 20 vote. Canada's two main parties say the spending is needed to battle the effects of a fourth wave of COVID-19 and kick-start an economic recovery.

Economists, however, warn that the debt and budget deficits that will accompany the higher spending could leave Canadians with a hangover that lasts decades when interest rates climb from the current ultra-low levels.

"Voters should be aware of the fact that deficits do matter. They will cost money," said Craig Alexander, chief economist at Deloitte Canada.

"The debt service costs for these deficits and the accumulated debt is going to take up fiscal capacity down the road," said Alexander, who supports targeted spending.

Canada's Conservatives, who tend to be more parsimonious than the other parties, revealed late on Wednesday that their campaign promises would cost more than C$51 billion ($40 billion) over five years without a hint of a balanced federal budget in that timeline.

The center-left Liberals, meanwhile, have proposed C$78 billion in new spending. The Conservatives say they would reduce the deficit by about C$7 billion more than the Liberals by 2026, mainly thanks to their plans to eliminate the national daycare program.

The spending that Liberal Prime Minister Justin Trudeau embraced to stem the fallout from the coronavirus pandemic is projected to push Canada's net debt to a record C$1.38 trillion by 2025. The Conservatives did not provide numbers for how their spending plan would impact the national debt. 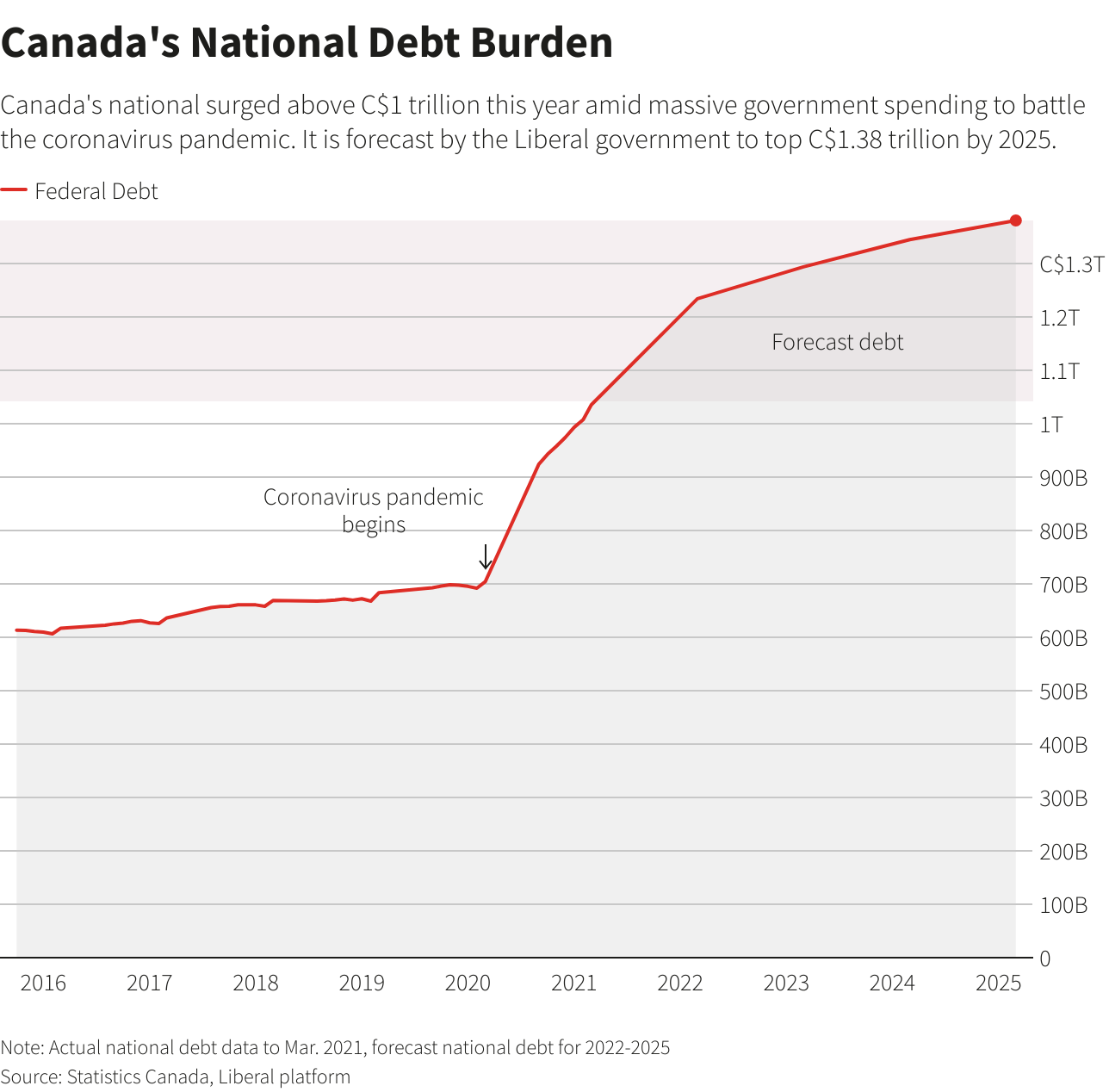 A near-debt crisis in the early 1990s, fueled in part by massive government spending in the 1970s and 1980s, shifted Canada's political landscape in favor of balanced budgets and prudent fiscal policy over big spending.

But Canadians regarded the pandemic-related spending, and with it massive deficits, as justified, said pollster Nick Nanos, head of Nanos Research. Any talk of balanced budgets has become more an afterthought, at least for many voters.

The worry is that S&P Global Ratings and Moody's Investors Service, two of the main ratings agencies, could follow Fitch Ratings' decision last year to cut Canada's triple-A credit rating if deficits become more structural in nature rather than cyclical.

That would likely increase debt servicing costs, which could lead to higher taxes or government spending cuts.

Before the pandemic, Trudeau had relaxed his focus on the deficit and targeted a lowering of the debt-to-GDP ratio to below 30%. Liberals say that ratio, now above 50%, will still slowly come down despite Trudeau promising billions more on top of the C$101.4 billion stimulus budgeted in April.

The Liberals, who currently have a minority government that relies on the opposition to pass legislation, trail the Conservatives 30.6% to 32.6% in the latest Nanos poll, with 20.3% for the left-leaning New Democrats, who also favor more government spending.

The economy, which performed worse than expected in the second quarter, is a top concern for all voters, polls show, though deficits are more of a worry for those who normally cast a ballot for the Conservatives.

Nanos said Canadians "just don't like excessively large deficits, and they get a little uncomfortable when they see deficits as being part of the regular operation default of a government."

Conservative leader Erin O'Toole has walked a tightrope, vaguely promising to balance the budget within the next decade without major cuts, while pledging new spending. 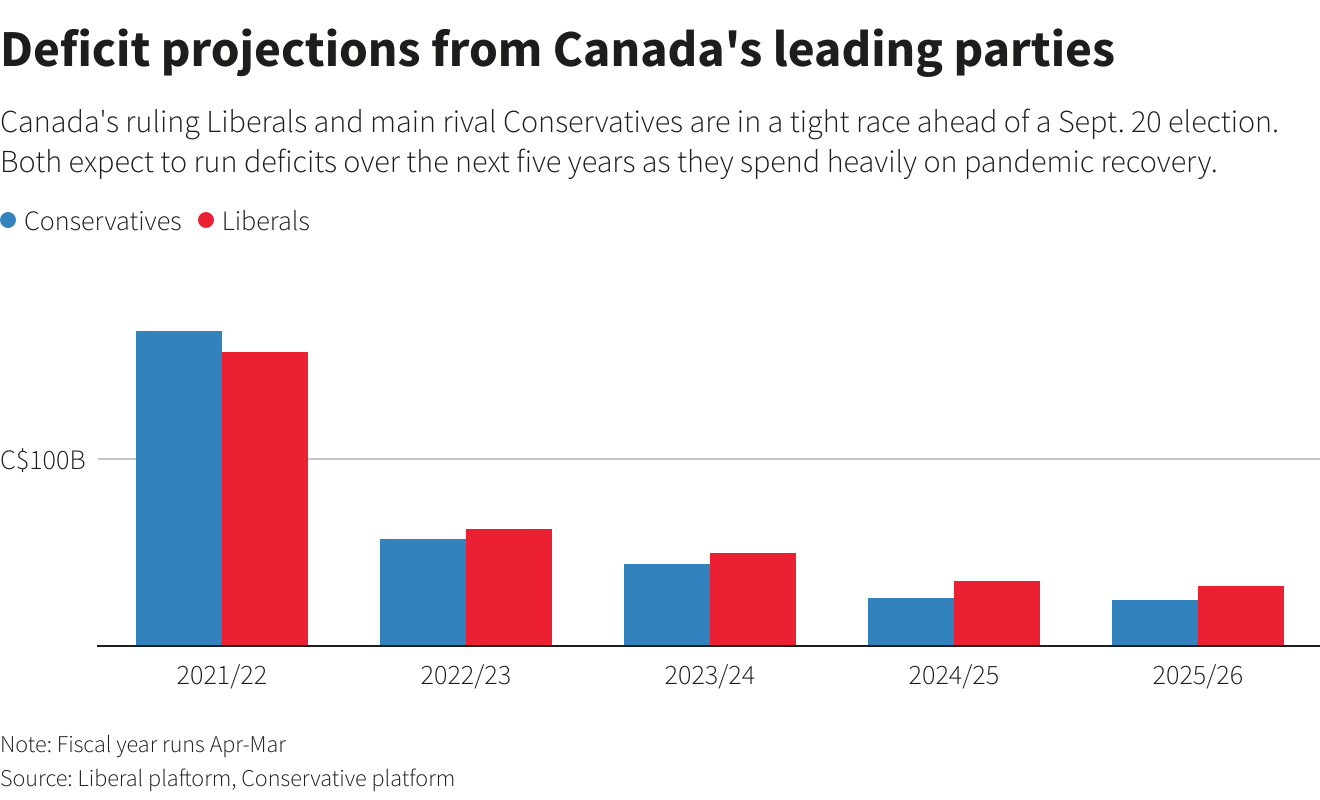 On Wednesday, the Conservatives said they would do better than the Liberals in lowering deficits over the next five years, in part by eliminating Trudeau's expensive national childcare program.

Economists say stimulus should be focused on initiatives that boost competitiveness, like digital infrastructure, along with social spending that increases labor force participation, like funding childcare.

"I think the narrative around building back better needs to be rooted in how are we going to make the Canadian economy more competitive and more dynamic, and give it an edge over its international peers," Alexander said.