The Biden administration has an ambitious $7.5 billion plan to expand electric vehicle charging to underserved areas, but it must first overcome a host of obstacles that have discouraged private investment in more equitable charging networks.

The experience of California - the U.S. state with the largest number of EVs and the most advanced charging infrastructure - shows how challenging it will be to achieve the goals in the $1 trillion infrastructure spending proposal Biden wants Congress to pass.

California has poured more than $2 billion into a variety of EV incentive programs over the last years, which include policies to promote equity in distribution of chargers. The state has also generated more than $25 billion through its carbon credits trading program since 2012, a portion of which goes toward EV and charging projects.

Nevertheless, California currently has less than 40% of the charging infrastructure needed to support projected EV growth by 2025, according to a U.S.-wide charging gap study by the International Council on Clean Transportation.

Lower-income areas in largely Black and Hispanic California neighborhoods continue to be significantly less likely to have access to public chargers, a February study by researchers at California's Humboldt State University found.

"For charging site hosts, the economics are extremely challenging because of the relatively low adoption of EVs today," said John Gartner, senior director at the Center for Sustainable Energy, which administers EV incentive and infrastructure programs on behalf of six U.S. states, including California. 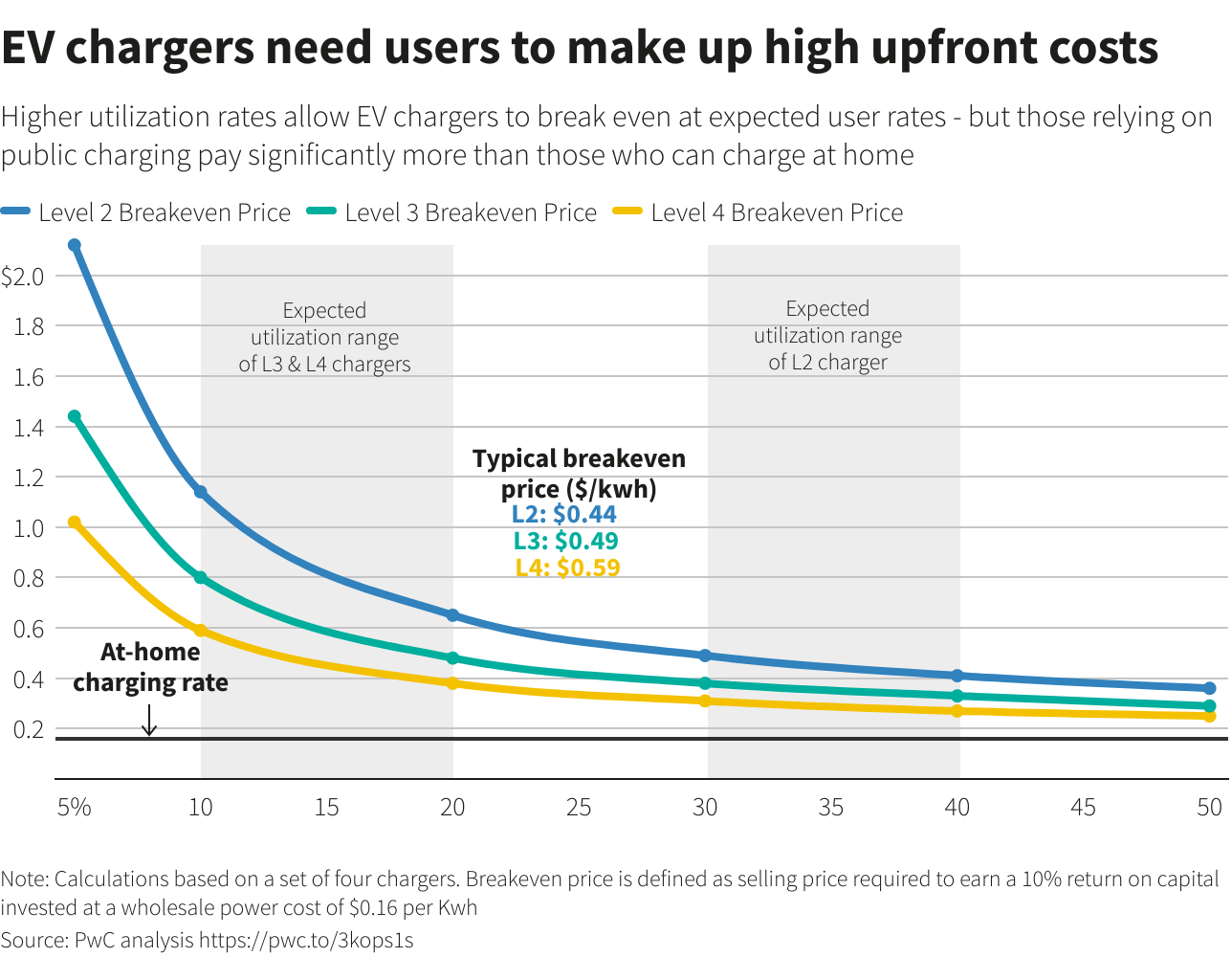 ONLY A DOWN PAYMENT

Gustavo Occhiuzzo, the CEO of California-based electric vehicle charging company EVCS, said the level of public support to defray upfront and operational costs is the key to decisions on building out his charging network in rural and disadvantaged communities.

"We need to be strategic where we invest our time and money. And for now, California is the one place that provides the biggest return for us," said Occhiuzzo, whose company maintains more than 1,500 chargers in largely disadvantaged California communities - and turns a profit.

Most of the private charging companies, however, such as EVgo, ChargePoint and Blink Charging Co, have yet to be profitable. Executives at EVgo and ChargePoint said government support was needed to expand charging to overlooked communities and create incentives for business owners or landlords considering installation.

Replicating California's programs on a national scale will require vastly more funding than the U.S. government has currently allocated.

Daniel Davenport, senior director of automotive at Capgemini Americas, estimates it would require around $50 billion to build out the U.S. charging network.

Getting more Americans to switch to a battery-powered car by improving access to charging infrastructure is a key component of Biden's agenda to combat climate change, with transportation accounting for the largest share of U.S. emissions.

The $1 trillion bipartisan infrastructure bill provides for $7.5 billion in charging network investments over a five-year period, with a portion set aside for low-income and rural areas.

A White House official said the government would also use Department of Energy loan programs and other financing tools, prioritizing public funding for locations that would not necessarily be supported by private capital alone.

"As the administration... develops the guidance for these new programs we will emphasize the importance of equity in the siting and operation of chargers," the official said.

State and federal officials face a two-prong challenge to expand charging beyond high-income zip codes: Battery-powered vehicles are still out of reach of many consumers, and a charger that is not used heavily will not recoup its costs.

High-speed charging units that can top up a vehicle battery in half an hour cost around $100,000 to build. Experts estimate they need to be used at least 20% of the day to operate profitably at current rates - prompting many charging providers to place them in areas with higher anticipated use.

In the future, used EVs could allow less-affluent Americans to drive battery-powered vehicles. Currently, used EVs account for only 0.3% of all U.S. franchise dealer used sales, compared with new EVs making up 3% of new vehicle sales, according to market research firm J.D. Power.

"It's going to be a very long time before EVs are a significant part of the used market," said Tyson Jominy, the firm's vice president of Data & Analytics.

Beyond government agencies, electric utilities are emerging as source of capital to expand charging networks, owning stations themselves or partnering with private companies.

Investor-owned utilities have approved $3 billion in EV charging infrastructure investments in recent years, according to the Edison Electric Institute, dominated by entities in California and New York. A quarter of those funds has been allocated to disadvantaged communities, and equity-based funding programs are expected to accelerate in the coming years.

"We're making sure to hit those low-income rural counties that would likely be underserved by the traditional private market, areas a private company wouldn't select until EV adoption is further down the road," said Lon Huber, a Duke Energy vice president.