Production at U.S. factories slowed more than expected in August amid disruptions from Hurricane Ida and lingering shortages of raw materials and labor as the COVID-19 pandemic drags on.

An improvement is likely with other data on Wednesday showing a sharp acceleration in a measure of factory activity in New York state this month against the backdrop of strong order growth and shipments of goods. Demand is being fueled by businesses desperate to replenish stocks after inventories were drawn down sharply in the first half of the year.

"Growth in manufacturing going forward is likely to be supported by low inventories," said Rubeela Farooqi, chief U.S. economist at High Frequency Economics in White Plains, New York. "But supply issues and shortages remain a constraint for now that are preventing a stronger rebound."

Manufacturing output increased 0.2% last month, the Federal Reserve said on Wednesday. Data for July was revised to show production surging 1.6% instead of 1.4% as previously reported.

Economists polled by Reuters had forecast manufacturing production would gain 0.4%.

The Fed estimated that Hurricane Ida, which devastated U.S. offshore energy production and knocked off power in Louisiana at the end of August, subtracted 0.2 percentage point from manufacturing output. The hurricane led to plant closures for petrochemicals, plastic resins and petroleum refining

Factory production is 1.0% above its pre-pandemic level.

Output at auto plants edged up 0.1%. The raw materials crunch, most evident in the automobile sector, has been worsened by the latest wave of infections driven by the Delta variant of the coronavirus, primarily in Southeast Asia, as well as by congestion at ports in China.

General Motors Co said it would cut production at its plants in Indiana, Missouri and Tennessee this month because of an ongoing microchip shortage. Ford Motor Co is also reducing truck production.

Stocks on Wall Street were trading higher. The dollar slipped against a basket of currencies. U.S. Treasury prices were mixed. 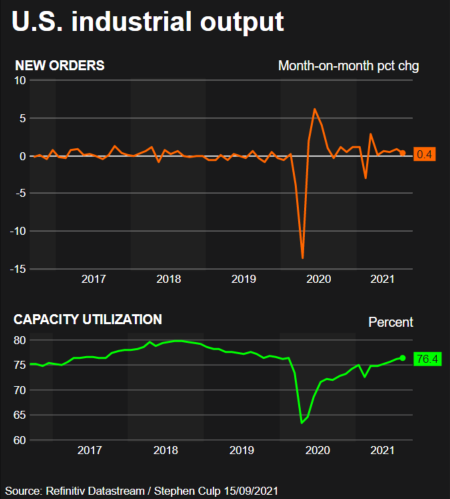 In a separate report on Wednesday, the New York Fed said its "Empire State" index on current business conditions surged to a reading of 34.3 this month from 18.3 in August. A reading above zero suggests an expansion in regional business activity.

But supply side challenges remained, with the delivery times measure hitting a record high. Firms in the region were very optimistic that business conditions would improve over the next six months, with capital and technology spending plans increasing markedly.

"However steadfast supply chain and hiring challenges will concurrently limit the expansion, and these headwinds won't diminish significantly until the COVID crisis is effectively contained at home and abroad." 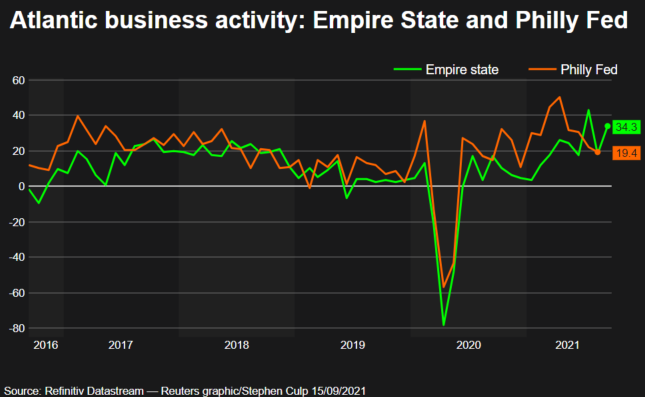 August's gain in manufacturing output and a 3.3% rebound in utilities raised industrial production by 0.4%. Industrial output increased 0.8% in July. Mining production fell 0.6%, reflecting hurricane-induced disruptions to oil and gas extraction in the Gulf of Mexico.

Officials at the U.S. central bank tend to look at capacity use measures for signals of how much "slack" remains in the economy - how far growth has room to run before it becomes inflationary.

Inflation appears to have peaked. A third report from the Labor Department showed import prices dropped 0.3% last month after increasing 0.4% in July. The first decrease since October 2020 lowered the year-on-year increase to 9.0% from 10.3% in July.

The report followed on the heels of news on Tuesday that consumer prices recorded their smallest gain in seven months in August. Fed Chair Jerome Powell has steadfastly maintained that high inflation is transitory.

The run-up in prices centered on used cars and trucks, as well as services in industries worst affected by the COVID-19 pandemic, is slowing. But strained supply chains will likely keep inflation elevated for a while.

"Inflation took a little breather in August, but the race or marathon isn't over yet," said Jennifer Lee, a senior economist at BMO Capital Markets in Toronto.