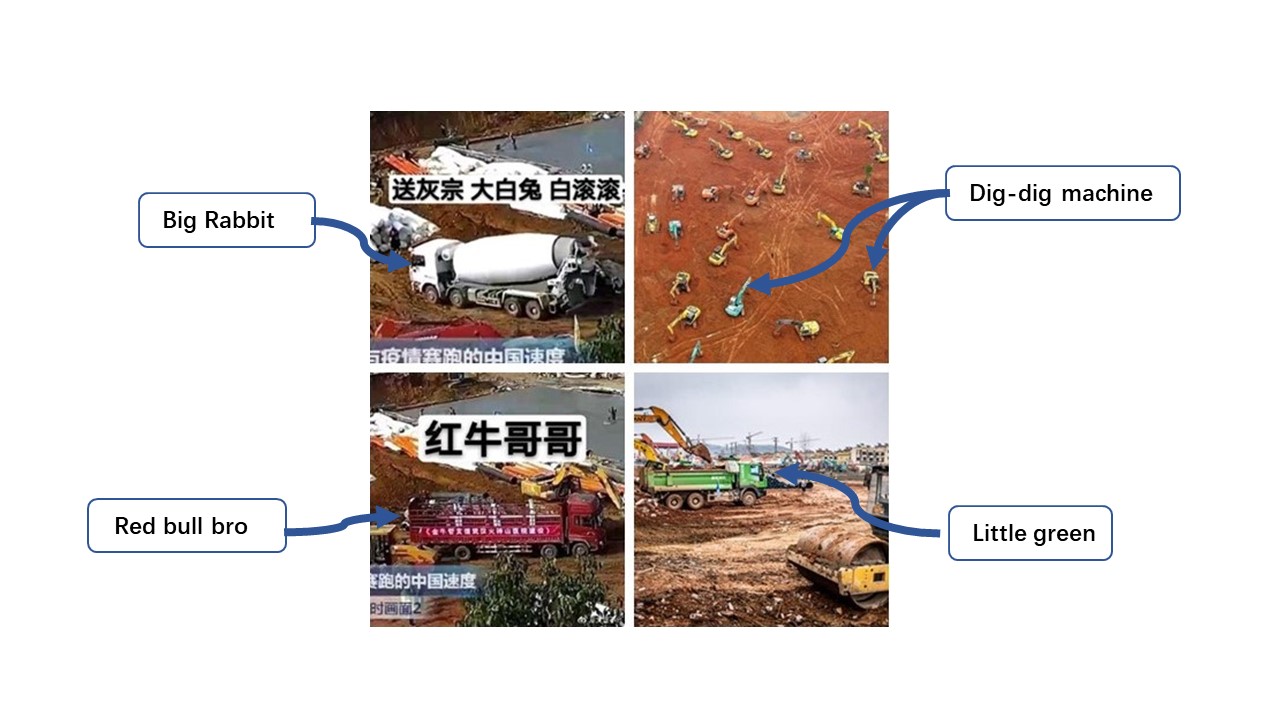 (Photo : Business Times/ Jane Zhang)
The web users named each of the equipment that built the hospital. Figure 1: Nicknames of some equipment

Ⅰ. How strong is the "Huoshenshan construction machinery club"? 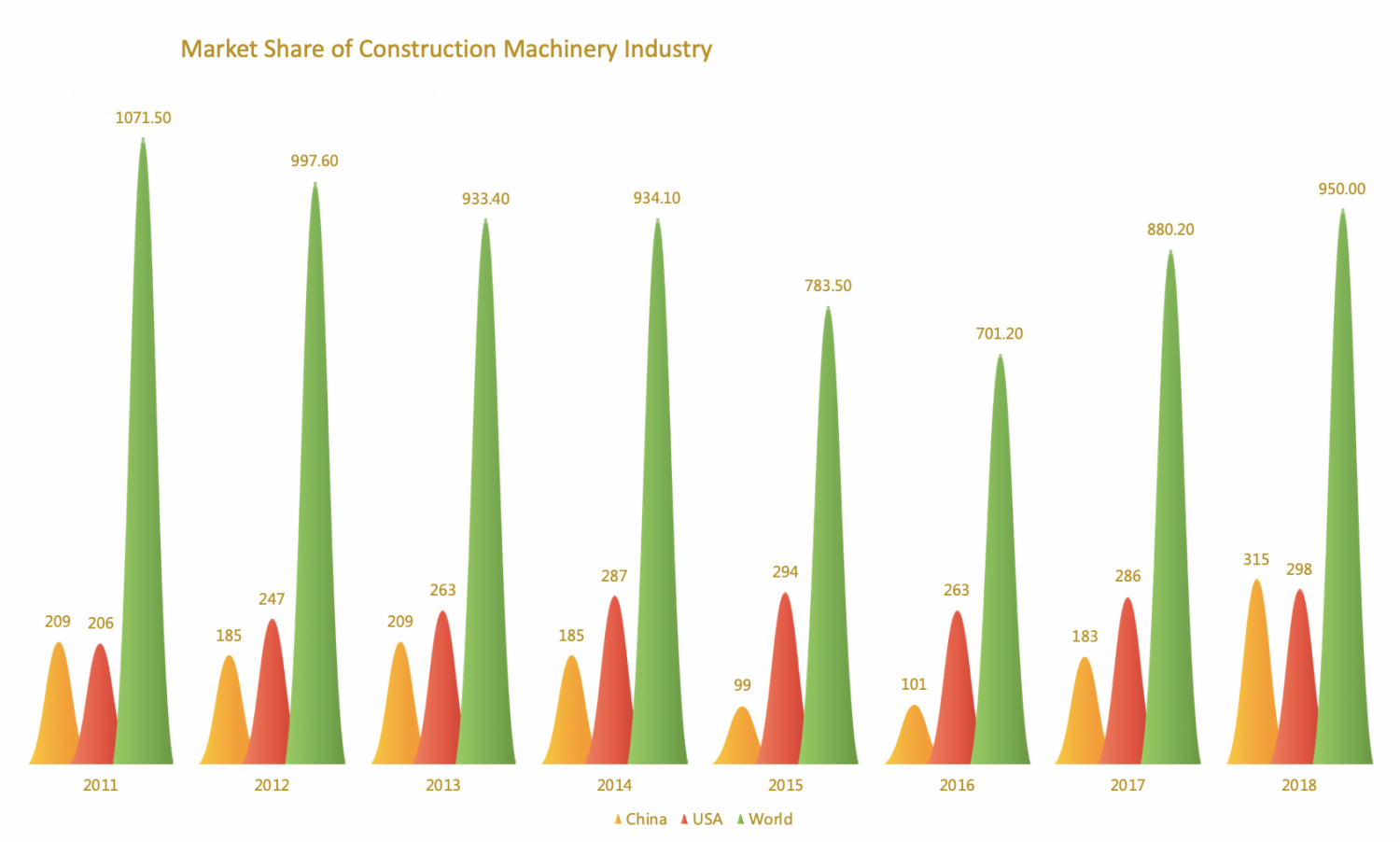 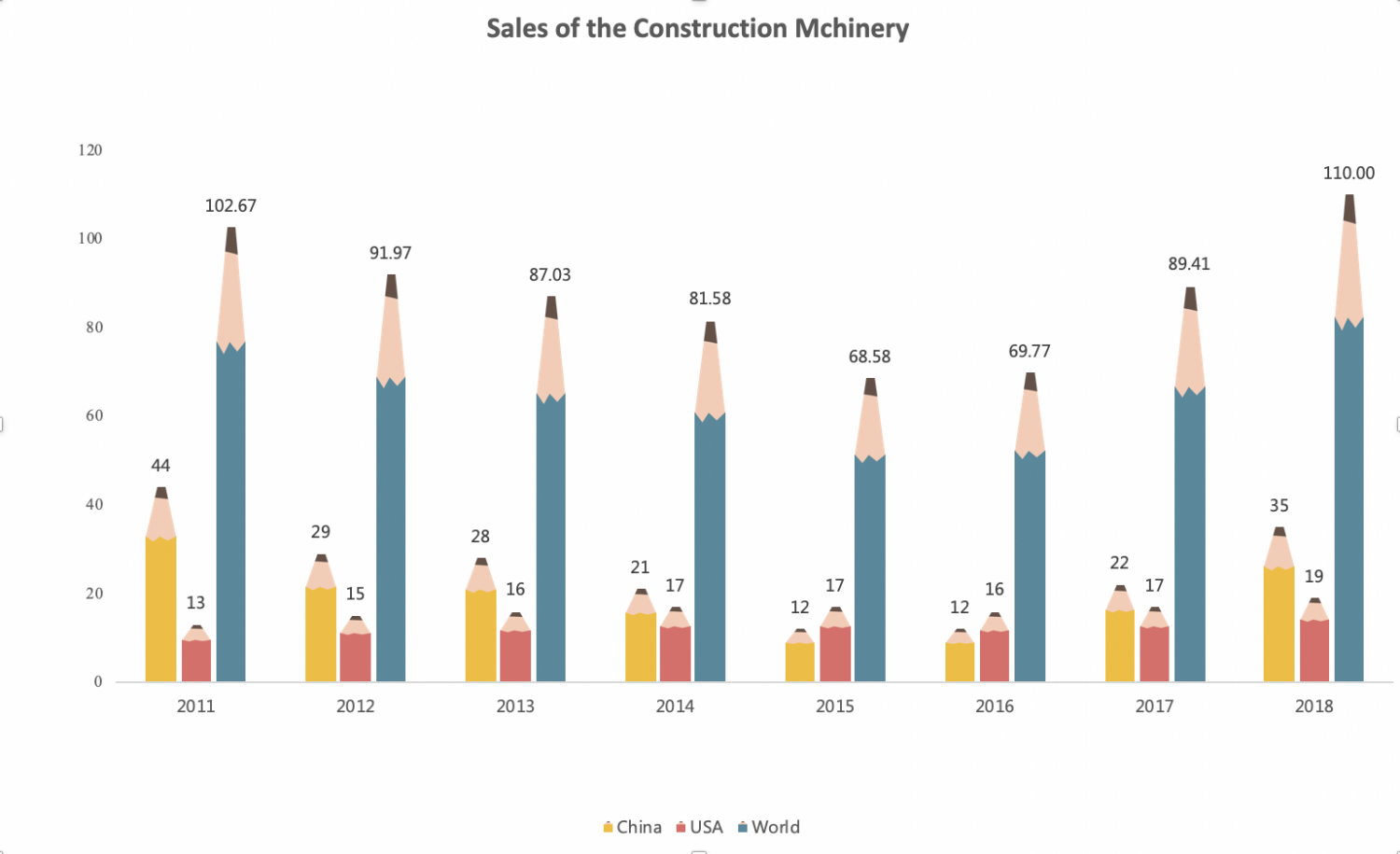 China’s construction machinery companies strengthened self-innovation capability on one hand and optimize the resource distribution through mergers, acquisitions and reorganization on the other hand. And the market share of their maturing brands abroad is also increasing. On the list of “Yellow Table Equipment top 50” released by the British KHL group, Chinese enterprises have always been a part that cannot be ignored. In fact, after the decline before 2016, the market share of Chinese brands on that list has increased year by year since 2017. 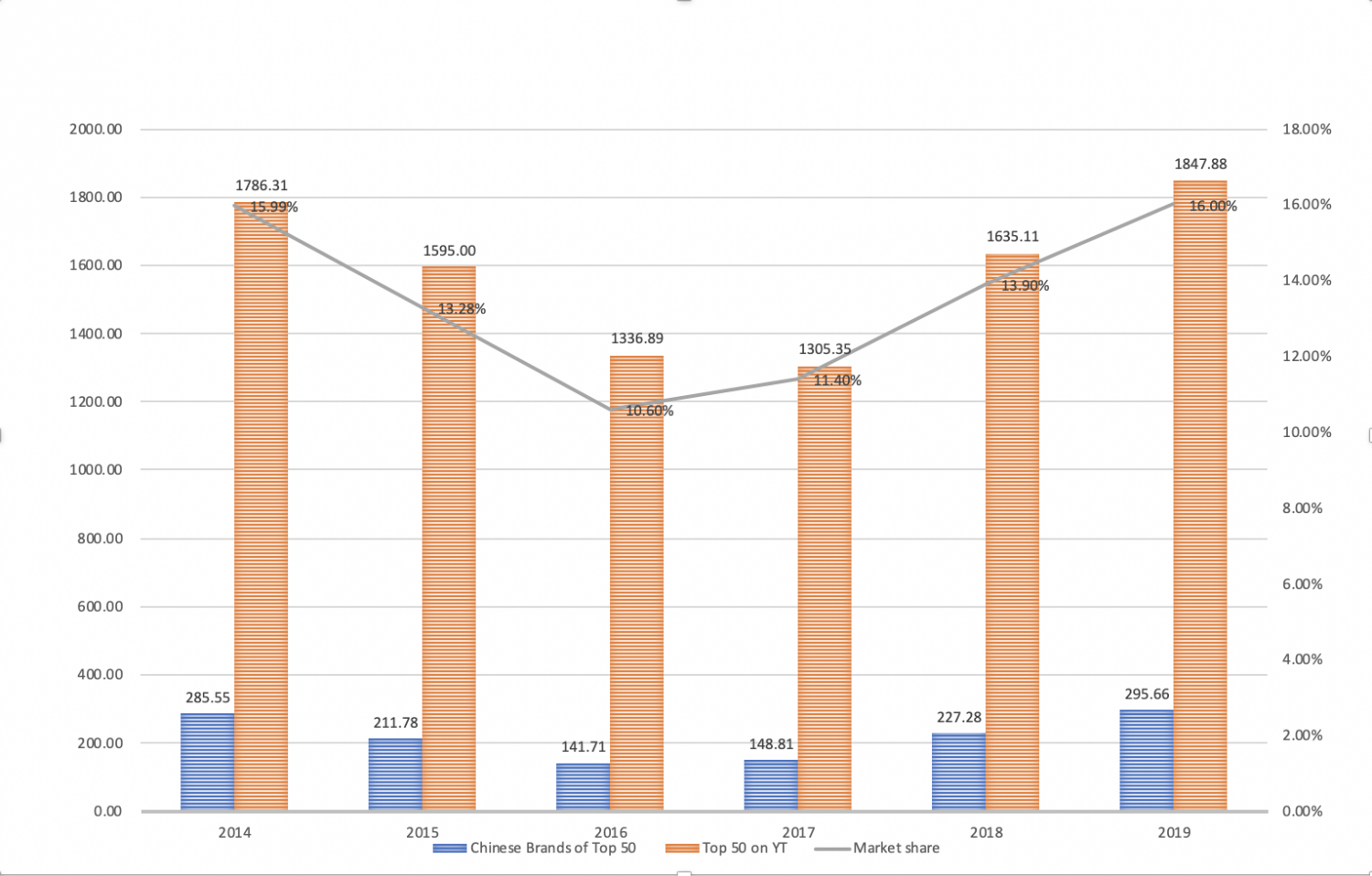 Ⅱ. Who are the members of “Huoshenshan construction machinery club”?
The production characteristics of the domestic construction machinery industry are multiple species and small batches at present, and the product distribution of each company has its own emphasis. While the mutual penetration between services and products of each enterprise began to emerge, and the degree of competition has the trend of strengthening in recent years. The “2019 Yellow Table Equipment top 50” includes 8 listed companies. Let's take stock of these listed companies.

1. XCMG and LiugGong, who born out of the arsenal.

The predecessor of Xuzhou Construction Machinery Group Co., Ltd. (XCMG) is Huaxing iron factory which was founded in 1943. And XCMG was listed on Shenzhen Stock Exchange in 1996. The market share of the company’s mobile crane is the first in the world, and the market share of many core products of which ranks the first in China, such as crane, roller, grader, paver, drilling rig and lifting fire truck. During its development in the global market, XCMG has gradually established a marketing network made up of more than 2,000 service terminals, covering 183 countries and regions. It has maintained the first place in Asia Pacific, Central Asia, Africa and other regions.
LiuGong Machinery Co., Ltd (LiuGong) was established on the basis of Shanghai Huadong iron and steel construction plant in the 1950s. This company created two firsts in history, that it had produced the first loader in China in 1966 and had become the first listed construction machinery enterprise in 1993. The company's products are mainly loaders. Its products, including bulldozers, excavators, rollers and other 20 categories, are sold in 140 countries and regions. The company has created a global network making up by 240 distributors around the world.

Shantui Construction Machinery Co., Ltd. is the first brand of bulldozer in China. Its products are construction machinery including mining machinery, farmland infrastructure construction machinery and harvesting machinery. Shantui developed the sd90-5 bulldozer in 2012, which was the first R&D independently in the manufacturing history of China's construction machinery and broke the situation that the whole machine and accessories of high horsepower bulldozer in the domestic market mainly relied on imports. The company was listed on Shenzhen Stock Exchange in 1997.
Xiamen XGMA Machinery Co., Ltd., formerly known as Xiamen Construction Machinery Factory, was listed on the Shanghai Stock Exchange in 1994. Although the old state-owned enterprise has deep roots in the region, it has not found the key link of growth since the decline of the industry in 2011. XGMA have always been in deflect or struggled on the edge of loss for the past years. At the end of 2019, the company experienced restructuring, hoping that the restructuring can bring vitality to the enterprise.

3. The other four private companies

SANY Heavy Industry Co., Ltd.(SANY), Zoomlion Heavy Industry Science & Technology Co., Ltd. (Zoomlion) and Sunward Intelligent Equipment Co., Ltd. (Sunward Intelligent) are three major machinery manufacturing enterprises in Hunan Province, which are called "three giants" in Hunan machinery industry and have similar self-made stories. In 1989, Liang Wengen founded a small company in a basement, which developed into Sany Heavy Industry Group. SANY has become the most competitive brand in China and the first brand in the field of construction machinery, pavement machinery, mining machinery, etc. today. Three years after SANY’s foundation, Zhan Chunxin, who works in Changsha Institute of construction machinery, and his colleagues set up a company to manufacture concrete equipment by raised money, which is Zoomlion, the leading enterprise of China's concrete machinery. In 1999, He Qinghua, a 53-year-old professor from Central South University, founded Sunward Intelligent with a loan of half million yuan in an idle factory. The R&D ability of Sunward Intelligent is outstanding. The hybrid excavator of Sunward Intelligent is the real industrialized energy-saving and environmental protection excavator domestic in China, and the energy recycling technology of which ranks the international leading level. The company is one of the earliest manufacturers of small hydraulic excavators and an exporting with the largest number of small hydraulic excavators to Europe in China. The three companies were listed in 2003, 2000 and 2006 respectively (Zoomlion was also landed on the Hong Kong Stock Exchange in 2010).
Lonking holdings limited (Lonking), who was founded in 1993, listed in 2005. Although the company is in the main board market of Hong Kong, its business activities mainly focus on the domestic market, thus the development prosperity of the domestic construction machinery industry directly affects its business performance. Lonking focuses on various subdivisions of construction machinery industry, which is one of the important driving factors for the rapid growth of it in recent years.

Ⅲ. Competitiveness among the top enterprises.

From the perspective of the five-year revenue, after the decline in 2015 and 2016, the top enterprises have risen sharply since 2017. SANY, XCMG and Zoomlion have a large income scale, while the other four are relatively small. And SANY ranks first in the industry. In 2018, the sales volume of SANY reached 55.8 billion, and it is expected to exceed 74 billion in 2019. 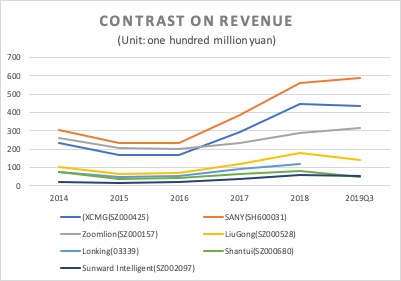 From the perspective of profit, SANY is also the largest enterprise in terms of gross profit rate and net profit rate. It is noteworthy that although Sunward Intelligent has the smallest revenue scale, it maintains a high profit margin relying on development ability and technical advantages. While Shantui's profit margin is relatively low. 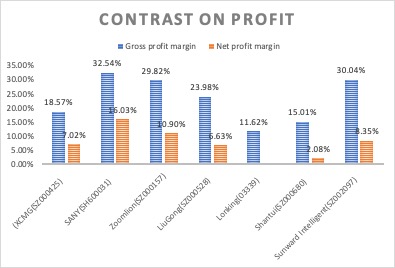 With the larger revenue scale and the better profit margin, SANY’s has more potential to extend its advantages and maintain the leading position since having the best ROE ratio among the top companies. In terms of income scale, XCMG is second only to SANY, but its profit rate and ROE are far from that of SANY, which is also the reason why the stock price gap between the two companies is large (XCMG shares closed at￥4.75, while SANY closed at￥15.79 on February 7). 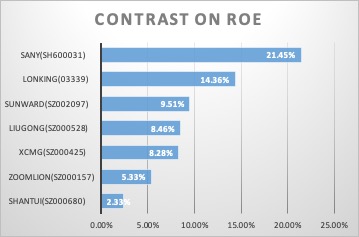 In terms of solvency indicators, Lonking has the largest cash reserves. There are three companies with quick ratio less than 1: LiuGong, Sunward intelligent and Shantui respectively. 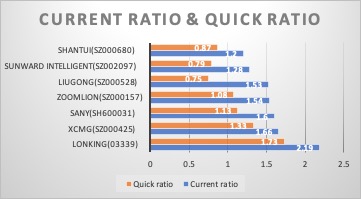 In 2018, the net EPS ratio of SANY, LiuGong and Sunward intelligent ranked in the top three in the industry, and Zoomlion is expected to surpass XCMG and Shanhe intelligence to be the third in 2019. 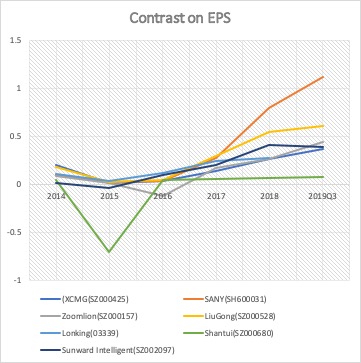 Ⅵ. The investment opportunities and risks

Benefiting from the demand of real estate and infrastructure investment, the demand of existing equipment upgrading, and the import demand of the countries along the belt and road, Chinese construction machinery industry gradually climbed out of a slump since the end of 2016. In 2020, the driving forces for industry recovery are still strong, but after three years of rapid development, industry growth may slow down. With the continuous boom of industry and the continuous improvement of market concentration, the advantages of leading enterprises will be more obvious.

According to the experience of SARS epidemic in 2003, the construction machinery industry will be impacted in the short term due to the low return rates, the macro-economy and the short-term decline of both upstream and downstream industries. In expectations of macro-economic growth in a long term, the industry is still good for a long time.